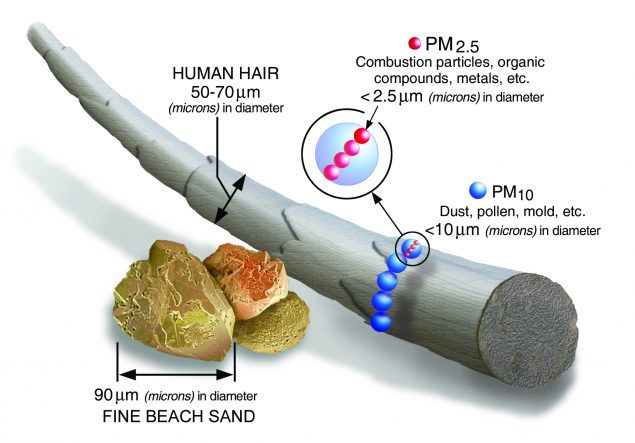 Particle pollution—also called particulate matter (PM)—is made up of particles (tiny pieces) of solids or liquids in the air.1 Research shows that short- and long-term exposure to particulate pollution are both linked to an increased risk of heart attacks and other forms of heart disease.2

Some particles, such as dust, dirt, soot, or smoke, are large or dark enough to be seen with the naked eye. Others are so small that you cannot see them in the air.1 These small particles are called PM2.5 and are 2.5 micrometers and smaller in diameter. The average human hair is about 70 micrometers in diameter, or 30 times larger than the largest small particle.3 Some common sources of PM2.5 are tobacco smoke, automobile or diesel exhaust, and wood smoke.

Particle pollution can affect anyone, but it bothers some people more than others.1 Small particles are the biggest problem, because they are the most likely to cause health problems. Their small size allows them to be inhaled deeply into the lungs. Once small particles are in the lungs, they can affect the heart and blood vessels.4 That’s why breathing in particle pollution can cause serious problems, such as a heart attack for someone with heart disease.1