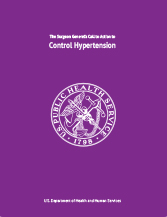 The Surgeon General’s Call to Action to Control Hypertension

Share this report and its executive summary with your colleagues and peers to help incorporate actionable strategies for reducing hypertension. 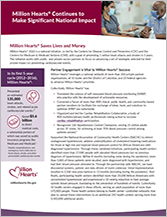 Read the September 2020 impact statement to learn about the initiative’s current work and past successes. 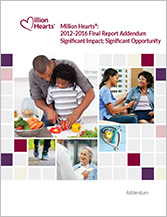 This addendum was published in June 2020 as an update to the final report, Million Hearts®: Meaningful Progress 2012–2016. Read the addendum to learn more about the cardiovascular events that were prevented during the first 5-year period of the Million Hearts® initiative. 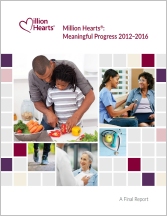 Million Hearts® has aligned efforts across the country to prevent cardiovascular disease using a select set of evidence-based public health and clinical strategies. Although final numbers will not be available until 2019, we estimate that up to half a million cardiovascular events may have been prevented from 2012 through 2016. 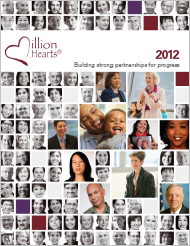 In 2012, the initiative’s first year, Million Hearts® built strong partnerships to ensure steady progress toward preventing 1 million heart attacks and strokes by 2017. Check out just a few examples of how partners worked to improve heart health—a focus on the ABCS, using health information technology, and working in teams.

US Trends in Premature Heart Disease Mortality Over the Past 50 Years: Where Do We Go from Here?
Trends in Cardiovascular Medicine, September 2019

Prevalence and Cardiovascular Health Impact of Family History of Premature Heart Disease in the United States: Analysis of the National Health and Nutrition Examination Survey, 2007–2014
Journal of the American Heart Association, 2019

Emergency Department, Hospital Inpatient, and Mortality Burden of Atrial Fibrillation in the United States, 2006 to 2014
American Journal of Cardiology, December 2017

Changes in the Geographic Patterns of Heart Disease Mortality in the United States, 1973 to 2010
Circulation, March 2016
– Click here to view an animated map that reflects the geographic shift in heart disease death rates in the U.S. between 1970 and 2010.

Disparities in Temporal and Geographic Patterns of Declining Heart Disease Mortality by Race and Sex in the United States, 1973–2010
Journal of the American Heart Association, December 2015

Use of Aspirin for Prevention of Recurrent Atherosclerotic Cardiovascular Disease Among Adults—20 States and the District of Columbia, 2013
Morbidity and Mortality Weekly Report, July 2015

Trends in Mortality Rates by Subtypes of Heart Disease in the United States, 2000–2010
JAMA, November 2014

Predicted 10-Year Risk of Developing Cardiovascular Disease at the State Level in the U.S.
American Journal of Preventive Medicine, November 2014

A Literature Review of Indirect Costs Associated with Stroke
Journal of Stroke and Cerebrovascular Diseases, June 2014

Costs of Hospitalization for Stroke Patients Aged 18–64 Years in the United States
Journal of Stroke and Cerebrovascular Diseases, June 2014

Sodium Intake Among US School-Aged Children: National Health and Nutrition Examination Survey, 2011–2012
Journal of the Academy of Nutrition and Dietetics, November 2016

Trends in Blood Pressure Among Adults With Hypertension, United States, 2003 to 2012
Hypertension, November 2014

Protocol-Based Treatment of Hypertension: A Critical Step on the Pathway to Progress
JAMA, January 2014

Association Between Usual Sodium and Potassium Intake and Blood Pressure and Hypertension Among U.S. Adults: NHANES 2005–2010
PLOS One, October 2013

Sodium Reduction Is a Public Health Priority: Reflections on the Institute of Medicine’s Report, Sodium Intake in Populations: Assessment of Evidence
American Journal of Hypertension, October 2013